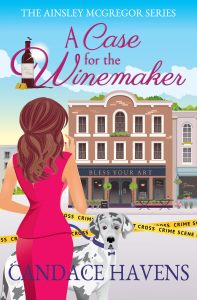 The closer she gets to the truth, the more she finds herself drowning in trouble

It’s an exciting time in Sweet River, Texas, and the whole town is talking. Maybe, a little too much. Former English professor Ainsley McGregor has gambled everything on her new business: Bless Your Art, an artisan market where local artists sell their wares and teach classes.

The bright, white space is filled to the brim with colorful art, yarn, jewelry, pet treats, antiques and even a few medieval weapons. Oh, and there are wine tastings. Everything is better with wine. Ainsley is surprised by how well things are going–right up until the moment her Great Dane finds a dead body. With her friend accused of the murder, it’s up to Ainsley to find the real killer.

As the suspect list grows longer, Ainsley has her work cut out for her. The task is made more difficult by the fact her brother, the sheriff, doesn’t seem to want her help. If she doesn’t wrap up the case soon, she might be the next wine, um, one to die. 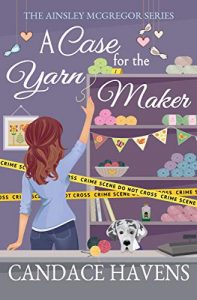 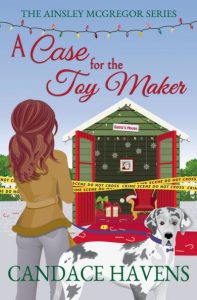 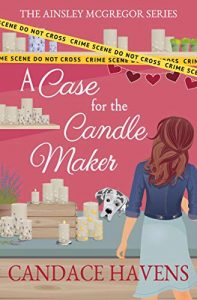 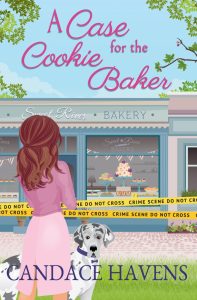 It wasn’t so much that I walked him, as he did me. I wasn’t the best at getting exercise, but that had changed in the days since George came into my life a few months ago. I’d already lost two pounds, and my fat jeans weren’t cutting into my waist anymore, so I wasn’t complaining.

I’d been eating my feelings for months, so a little exercise wasn’t such a bad thing.

Behind Main Street on the north side of our building, was a huge park with the Sweet River running through it. There were walking and bike paths, and it had old-fashioned gaslight-style lamps that made it almost as bright at night as during the day. The sidewalks were bordered by gardens, each tended by a different group. The open, green areas were where many of the town’s festivals were held. Handy, since people visiting said events could come through the back entrance into our building. That’s why I’d also had a sign painted on the back.

George dragged me toward his favorite tree. But he stopped a few feet away and whined a bit. I hadn’t heard him do that before.

“George, I need you to hurry it along, buddy. I don’t have time for you to be super picky about the tree. Let’s get it done.” I kept a firm tone with him when we were outside. But I never yelled. He’d pout for days if I did, and besides, who yells at a dog?

He growled. He’d never done that, either. And it wasn’t at me, it was at whatever was on the ground under the leaves.

A shiver ran through me.

Oh, no. That was my internal scare-dar. My gut always told me when danger was near or when something wasn’t quite right. The night I’d been mugged in Chicago, I’d had shivers just a few minutes before. That same sense of dread I’d experienced then slithered through me now.

Whatever was about to happen, I just wanted to run back to the shop and reclaim my happy space.

Think logically. There are no muggers in Sweet River.

The weather was cooler, and creepy crawlies were looking for places to hibernate. I’d watched enough Discovery Channel to know they liked leaves to get warm.

Could it be a snake? There were tons of leaves piled there.

The dog growled again, a deep and sort of mean sound.

“George?” I tugged gently on his leash, encouraging him to back away. “Please,” I whispered. Nerves jangled through me. I was scared he might get bitten. “Back away slowly. I don’t want whatever is under there to get you.”

He grunted and sniffed the ground.

Then he sat and wouldn’t budge. He outweighed me by a good sixty or so pounds, depending on how much chocolate I’d eaten the day before.

Stupid dog. The snake was going to strike any second. I pulled him hard, and as I did, his tail swept across the leaves and something popped out. He moved back then.

“Sit, George,” I said firmly, as my heart pounded against my chest.