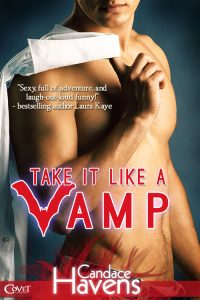 Vampire Nick Christos might’ve been born in the Middle Ages, but the good old days seem tame compared to the last eight years he’s spent ruling the Supernatural Council. His only respite is with his cute neighbor Casey Meyers, a woman he wants more than any undead man should. Sure, he’s forced to take a cold shower after every encounter, but there’s no way he’ll test his own strength by getting too close to a human, and he’s not willing to risk her life–not with bloodthirsty family on the prowl out to ruin Nick’s life.

When said Nick’s kin shows up, the innocent Casey is caught in the middle of a centuries old fight, and Nick’s biggest fear is realized. Now, instead of keeping his hands off his neighbor, he’ll risk everything to save the human he’s come to love.