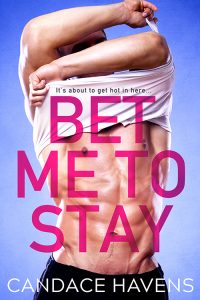 After a bet with his brother, Liam O’Connor has to date the next woman who walks into the pub. And he’s all in, because his pub is on the line. What he didn't expect was Cassie Meadows, who at first glance with her big glasses and bulky sweater looks like a woman who has many, many cats––but her wit and smile make him wonder what’s underneath her bulky armor.

Cassie Meadows aka sweet romance author Cassie O'Brian is about to lose everything. As in, her writing career is going down the drain because she can’t write the sexy stuff that’s selling these days. She needs inspiration in the worst way. That’s when she walks into the wrong pub at the right time. Sexy owner Liam is just what the writing doctor ordered. Her whole body is feeling inspired––and when he makes a proposal she can't refuse––she’s all in. Oh, hell yes. Best. Sex. Of. Her. Life. Thanks to Liam, she's about to write a best-seller.

Cassie couldn’t believe she’d just given this gorgeous man her pen name as though it were her real name. She could say she did it to keep the fantasy in her head alive, to protect her story, but honestly, she just didn’t want him to figure out she was associated with The Rustic Pig, and their night would end.

While the two pubs didn’t really share a lot of clientele, they were still two Irish pubs across the street from each other. Of course, there was a healthy rivalry. Once, she remembered her mom ranting that the Boar had added breaded pickles to their menu and her staff had said they were amazing. Two weeks later, the Pig had breaded pickles soaked in buttermilk with a garlic aioli dipping sauce.

It probably wasn’t a big deal, but Cassie didn’t want to risk it. Every word he said with his soft-spoken Irish lilt was like music to her ears. She was already mentally revising the hero in her novel to be of Irish descent with a penchant for calling the heroine “his lass,” a hint of gravel in his voice that slid across her skin like velvet.

If this evening lasted much longer, maybe she wouldn’t even need to sit in the back of the bar and write. She’d have plenty of memories to build on.

“I really don’t want to say right now, if you don’t mind,” she rushed to answer. “I’m still in the developmental process of something new and don’t want to, well, jinx myself.” Sure, sure. That sounded plausible.

His gaze drifted off for a second as though he were remembering something from his past. “Right. That makes sense.” He tossed back his Jameson, and she watched the muscles in his neck move as he swallowed the amber liquid. Yup. Even his Adam’s apple was sexy.

He set the tumbler down and their gazes met.

The earth moved. Or the liquor finally hit her. Something happened, because her breath caught in her chest and her mind whirled like a tornado slammed into it.

Was there such a thing as too sexy? Because Liam might be it.

She reached out to grab the edge of the bar to steady herself, but she was a tiny spaceship trying to escape the intense gravity of a black hole without hope. She looked back up at him, a little shocked to discover his gaze hadn’t wavered.

Cassie was many things, but used to keeping the attention of a man this raw and masculine was not one of them.

Could he be messing with me? Maybe he does recognize me and wants to get info on the family business.

She wanted to smack her own head. Only she would think someone was so low as to flirt with her for information on their next appetizer.

“Hey, I know this sounds crazy, but what do you say we go grab a bite to eat at The Diner?” he asked, mentioning a local breakfast haunt a few blocks away. “There’s nothing better than pecan waffles at midnight on a Tuesday.” He winked.

Okay, he was definitely flirting with her. She hadn’t really considered he might be interested in her. She was wearing baggy sweats (only thing clean, no lie) and combat boots. And a sweater with a butterfly on the front that her Gran had knitted for her last Christmas.

Oh God. She groaned as the realization of what she was wearing sunk in. “I don’t know any recipes,” she blurted out.

Wait. What did I just say?

Could someone actually die from embarrassment? It was about to happen right here on this barstool.

Liam chuckled. “It’s okay. They cook them for you. No recipe required.”

No way she attracted the hottest man she’d ever met by wearing this and telling his brother to shoo.

“Because”—he took his time to lean in close like his brother had earlier, only this time, the move totally worked, and her ovaries were high-fiving each other—“I find you interesting. You don’t say what I expect, and I’m tired of predictable.”

She nodded. This was true. Her parents always complained they didn’t understand her, and that she lived in a fantasy land. “And the sweats?”

“Oh, we’re burning them.” He didn’t miss a beat, and she respected that. “And those awful shoes. Best to get rid of that bulky sweater, too. Does you no justice.” He shook his head. “I’m trying to imagine you without those things.”

Her eyes widened. “You’re imagining me naked!” she squeaked.

His sexy grin seemed turned up to a hundred degrees and melting her clothes from her body. “I am now,” he said softly.

Heat scorched through her blood, her skin sensitive to the cool air blowing from the air duct above her. Even she was convinced she was naked, her bare ass stuck to the leather of the barstool.

Liam wasn’t just the sexiest man she’d ever met. He was a wizard.

She was so hot, and possibly embarrassed by her clothing choices, she didn’t even hesitate before reaching up and yanking the oversized sweater off. She’d worn a tight-fitting tank top beneath, and the way his gaze zeroed in on her fairly slim waist (thank you, gym membership) and full breasts (who were standing up as if to catch his attention, and thank goodness for sexy bras), she almost believed he was interested.

“Not feeling the sweater, luv?” he asked, amused. Someone tossed a ten on the bar, and Liam made quick work of handing him a frothy mug of beer and two dollars change.

The patron grabbed his beer and a single and headed back to somewhere behind her. Didn’t matter where.

Liam raised an eyebrow then wiped down the surface of the bar with a rag he’d grabbed from the sink.

Shit. Had she seemed too bold stripping before their first date? She totally sucked at this stuff. Thankfully, he tossed the rag in the sink and put her out of her misery. “All right, I think I’m done here. You ready?”

“For what?” He’d asked her to do something, but she couldn’t remember what now. Gah, he must think she was a ditz.

“For waffles, of course.”

Yup. That was it. Liam had asked her out on a midnight date.

If this man, this sexy Irish man, wanted to actually date her… Maybe she wouldn’t have to rely on only her imagination to fix her novel. Her agent’s advice rang in her head. Liam could pump her hard. Real, real hard. Over and over probably.

“You’re not the kind of guy who expects sex on the first date, are you?” she blurted out before her brain could catch up with her mouth. Her heart pounded in her ears. She’d never been this bold in her entire life. Desperation was a funny thing.

He leaned backward, probably startled by her question. “I never expect anything after a date, first or last,” he answered somberly, but then broke the effect when one corner of his mouth lifted up in a half smile fraught with boyish charm. “But I do always hope.”

Cassie could easily see how these two very different men were brothers. Liam may be the serious one, but he had a bit of the Devil in him as well. She liked it. A lot. But they needed to set ground rules. She had a career on the rocks right now, and she had priorities.

Placing her folded arms on the bar, she leaned forward, her weight pressing her flesh into the worn surface. “But what if I were to say I’m not in the mood to shop for a relationship?”

Liam mimicked her stand by placing his elbows on the bar and leaning forward as well. Their lips were barely ten inches apart, the warmth from his wide shoulders wrapping her in a sexy cocoon. “I’d say that’s great because I’m not a relationship kind of guy.”

She wanted to see how far she could push him.

“Any weird kinks I should know about?”

“Nothing that would require a safe word.”

“Anything you want to ask me?” she offered. They’d moved from possibly dating to now negotiating some sort of sex contract. Surely he had his own questions.

“Just one thing,” he murmured as his brother started to head their way. Oh God, she didn’t think she’d survive if Romeo brought them both to their senses. Liam must have had the same thought, because he turned his head and leveled a stare at his brother that had him raising both hands and backing away.

She drowned in pools of his liquid green eyes. “You’re not really wanting waffles now, are you?”

She shook her head slowly. “What waffles?” She should know what he was talking about, but her brain misfired due to all the testosterone buffeting her skin. “I don’t want eggs, either,” she added in case he had other breakfast ideas.

For the first time since they met, Liam gave her a full, sexy grin before lowering his head enough to whisper in her ear, “Oh, lass, you haven’t seen nothing yet.”

He tugged on her hand as he maneuvered them both through the back of the bar and to a door that most likely led to the kitchen. His brother called out, “Gonna leave me to clean up all by my lonesome?”

Liam flipped him off but kept moving. Thank God. If he changed his mind, Cassie wasn’t sure she’d ever be able to revive her ovaries again.

At the moment, they were singing choruses of Hallelujah.

I’m so doing this.